The School of the High Tree Willow Spirit

In 1569, during the Yeiroku era (1568-1579), in the Funagata Yama area of ​​Miyagi, there lived a mountain priest from the Abe family who was named Unryu (cloud dragon). The bugei ryūha Daijiten transmits his name as Sounryu. He was an expert in shuriken, bōjutsu, yari, naginata, and taijutsu of the Amatsu Tatara Rinpo Hiden Makimono.

The Amatsu Tatara Scrolls were kept by the Abe, Nakatomi, Otomo, and the Monobe. Takamatsu Sensei’s family also had a copy because they were related to the Kuki family.

Unryu taught his system to Ito Sukesada, a famous martial artist of his time. He was a Samurai from Katakura Kojuro in Fukushima Province and added hanbō, kenjutsu, and kodachi to the teachings of Unryu.

He taught the techniques that would later become Takagi-yoshin-Ryū, Takagi Oriemon Shigenobu, a young Samurai from Tohoku-Shiroishi Han in Oku. He was born on April 2, 1625, and died on October 7, 1711. He attained the menkyōkaiden when he was just 20 years old. On August 15, 1695, he was appointed shihan in 6 different martial arts of the imperial bodyguards by Emperor Higashiyama.

He modified, improved, and expanded the techniques he had learned from Ito and summarized them as Takagi-yoshin-Ryū, named after himself.

He studied eagerly to improve himself, to avenge his father’s murder. His father had left him a valuable lesson: A willow is flexible, but a tall tree is fragile.

The style has been called variously throughout history, including jū tai jutsu, jūjutsu, and daken taijutsu. The Ryū was heavily influenced by the Takenouchi Ryū jūjutsu and the Kukishin-Ryū.

In the 17th century, the sōke of Takagi-yoshin-Ryū, Takagi Gebboshin Hideshige, and the sōke of Kukishin-Ryū Ohkuni Kihei Shigenobu had a competition and became close friends. Both systems exchanged information and were therefore restructured.

The Ryū was passed on to Takamatsu Toshitsugu by Mizuta Tadafusa Yoshitaro in August 1908, and to Hatsumi Masaaki in May 1959. 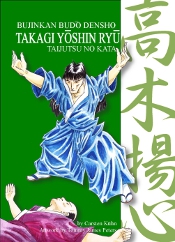