The School of Knocking Down the Tiger

It is believed that Koto-Ryū koppō jutsu came from China via Korea, brought by Chan Busho, a Chinese warrior. But that would have been many hundreds of years before the founding of the Koto-Ryū. The exact origin of Ryū is not known, but the techniques were summarized in 1542 by Sakagami Taro Kunishige in ryuha. He was also the sōke of the Gyokko-Ryū. Both styles have many similarities.

Many Ninja and Samurai have been trained in the methods of koto-Ryū. Momochi Sandayu taught Ishikawa Goemon, the infamous Ninja who was a criminal. Momochi always denied that Ishikawa Goemon was ever a member of his clan.

Goemon was seen as the Ninja Robin Hood and was probably caught and scalded to death in boiling oil. Some historians, including Takamatsu Toshitsugu, believe he was never caught, the bakufu was just too embarrassed to admit it. In many cases, the story passed down orally is more believable than the written word.

The Koto-Ryū contains the complete kyusho (Atemi pressure points). The Ryū had a very rare and extraordinary method of kenjutsu in which the sword was held as if the swordsman were incompetent, grips and stances being constantly altered.

There is also a unique stance in this Ryū, the mangetsu no kamae, in which the sword is held above the head to blind the opponent with the sunlight on the blade. Or when it rained, the blood gutter was used to collect water, which was then used to blind the enemy’s eyes.

Another specialty of the Koto-Ryū is not to look your opponent in the eye, but between the eyebrows. So he can’t see the intentions but thinks he’s making eye contact, which will confuse him.

Takamatsu Toshitsugu began his training in Koto-Ryū when he was 9 years old and was declared a master at 13.

In 1960, Takamatsu is said to have convinced a journalist from the Tōkyō Sport Newspaper of the effectiveness of the koto-Ryū by drilling five holes with his fingers in the bark of a tree. 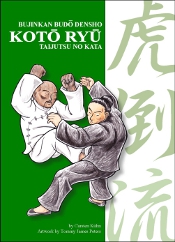