The School of the Unmoved Heart

The Shinden-fudo-Ryū was founded by Genpachiro Temeyoshi in the mid-12th century. One can trace the trail back to the koshi jutsu introduced by Izumo Kanja Yoshitero. It is not clear if he is the same person as the Kukishinden-Ryū’s Izumo.

The basis of the teaching is the knowledge of nature. Training begins by using nature to strengthen your body. First the legs and hips, then the fists.

In this Ryū, you didn’t build a Dōjō or tinker with training tools but stayed in nature during training. They practiced hitting and breaking on trees. Then you practiced hardening your forehead against trees. Kicking the unique kicks of the Shinden-fudo-Ryū was practiced in the bamboo forests. People practiced tearing the bark off trees, which is very similar to tearing the skin off.

This school specializes in jūjutsu and iainuki (swift swords). The katana in the Shinden-fudo-Ryū is much longer and heavier than a normal katana, making it very difficult to draw such a sword. But later you were able to draw normal swords much faster.

Izumo is said to have been taught how to use the yari by tengū, and these techniques remain a secret to this day. Various yari were used in this Ryū, the ono (war ax), otsuchi (war hammer), and the naginata.

The hōjō jutsu (The Art of Binding) was also used in this Ryū. You could smash through Samurai armor with the big war axes, and smash through doors and barricades with the war hammer. The naginata was primarily used by foot soldiers against horsemen.

There are no kamae in Shinden-fudo, the shizen no kamae is the identifying mark of this Ryū.

It was extremely important to always land on your feet when thrown because in Shinden-fudo-Ryū you always wore the daishō. A fall with swords was very dangerous and could even be fatal with wooden swords.

Takamatsu was only thrown around the first year when he learned the Shinden-fudo-Ryū from his grandfather Toda before he was allowed to learn a kata for the first time. 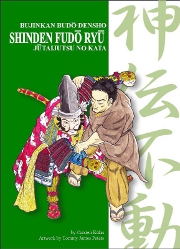