The School of the Hidden Cloud

The Kumogakure-Ryū Ninja went into battle in armored clothing. Another interesting thing is that a demon mask was sometimes worn in this Ryū. One of the Kumogakure-Ryū’s special weapons is the kama yari (hook spear). When fighting swordtails, hooks were used to deflect blows. However, the hooks were also used to kill enemies from above. In the densho of the Kumogakure-Ryū, a Ninja named Sarutobi Sasuke is mentioned as using the hook spear to move from tree to tree. Another specialty is survival training and the art of lighting fires in all situations.

There are probably many techniques that involve taking small steps because women wore the traditional kimono at the time. 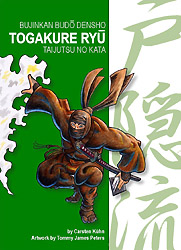