School of the Jeweled Tiger

The Gyokko-Ryū koshi jutsu is the oldest of the nine warrior traditions of the Bujinkan, and it can be said without question to be the core of most of our arts. Hatsumi Sensei established that koshi jutsu forms the basis for the following systems: Togakure-Ryū, Koto-Ryū, Gikan-Ryū, Shinden-fudo-Ryū, Gyokushin-Ryū, and Kumogakure-Ryū. Gyokko means bejeweled tiger or tiger jewel and can refer to the tiger’s eye.

The method of movement and basic principles were developed in China during the Tang Dynasty (618-907). One suspects from the movements that it was developed by either a small man or a small woman. It is known that there was a woman at the court in Chan’an (now Xi’an) who was well known for her martial arts. When the Tang Dynasty was overthrown in 907, many of the nobles fled to Japan. The names Yo Gyokko (Yao Yu Hu) and Cho Gyokko are associated with the arrival of martial arts in Japan (perhaps they were the same person). General Ikai (or Ibou) is also associated with the origin of Gyokko Ryū. According to Hatsumi, this person could also be someone (bou) from a foreign country (I).

The first real sōke of the official Gyokko-Ryū was Tozawa Hakuunsai. His name may mean a connection with the Hakuun Ryū Ninjutsu, which no longer exists. This all took place in the Hogen Era (1156-1159), making Gyokko-Ryū the oldest documented fighting system in Japan.

Koshi jutsu means to knock down the tiger with one finger. That is why there is strong punching training, especially for the fingers, toes, and knuckles, but also for all other parts of the body. Characteristic of the fighting style is powerful blocks with the knuckles that destroy the attacker’s muscles, tearing and drilling techniques with fingers and toes, powerful stomping kicks, grappling techniques, and throws. In the Gyokko-Ryū it was taught to use only as much force as was necessary to defeat the opponent. In addition, the Ryū was known for his skills with the sword, for roku shaku bō and tantō.

The Nine Rules of Gyokko-Ryū 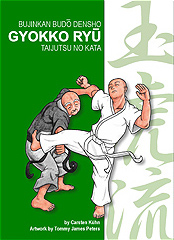