My Ninjutsu website goes live on December 22, 1999. First on a shared space without its own domain. It later runs under two different domains before getting its final name: kogakure (木隠, Japanese hidden behind leaves and trees).

I still remember looking in a very thick Japanese dictionary for a term that didn’t exist on the internet yet and that also has a meaning.

The theme had of course animated Ninja stars, garbled font, and a page counter. 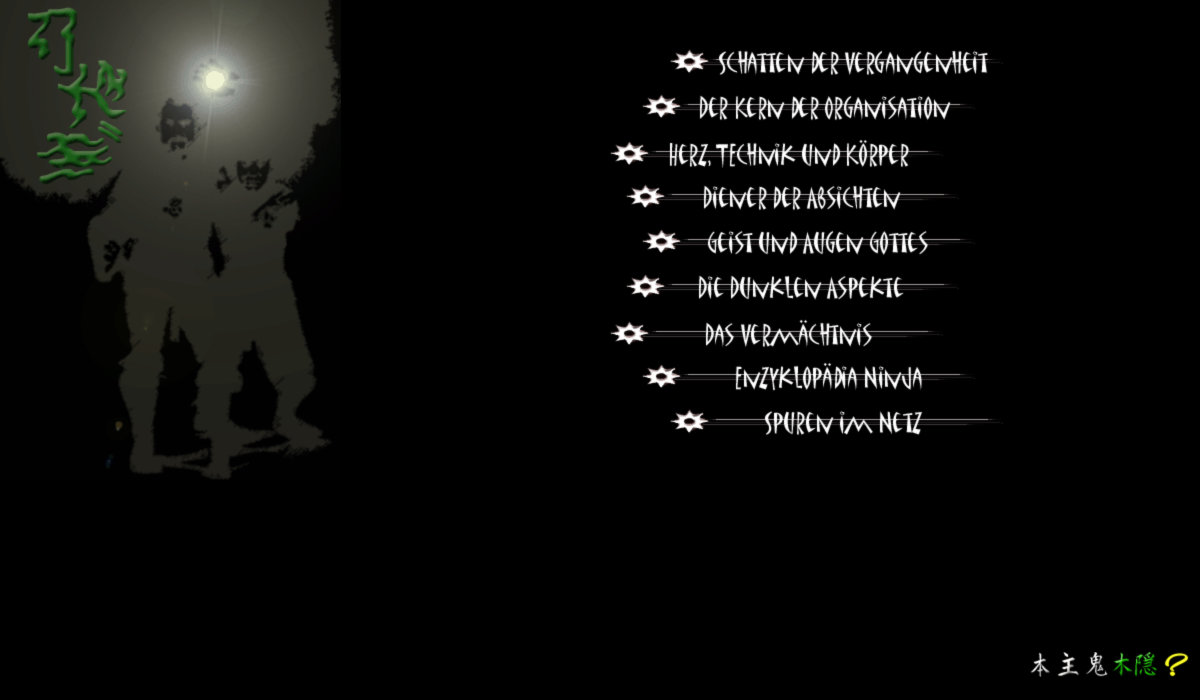 The site actually started out as just a collection of notes, but slowly grew into a larger site over the next two years. In January 2001, work on the website was almost complete. By that time, I had put a ridiculous amount of hours into researching and writing the articles. I had also created numerous intricate 3D models of weapons, tools, and techniques in Poser and 3d Studio Max. 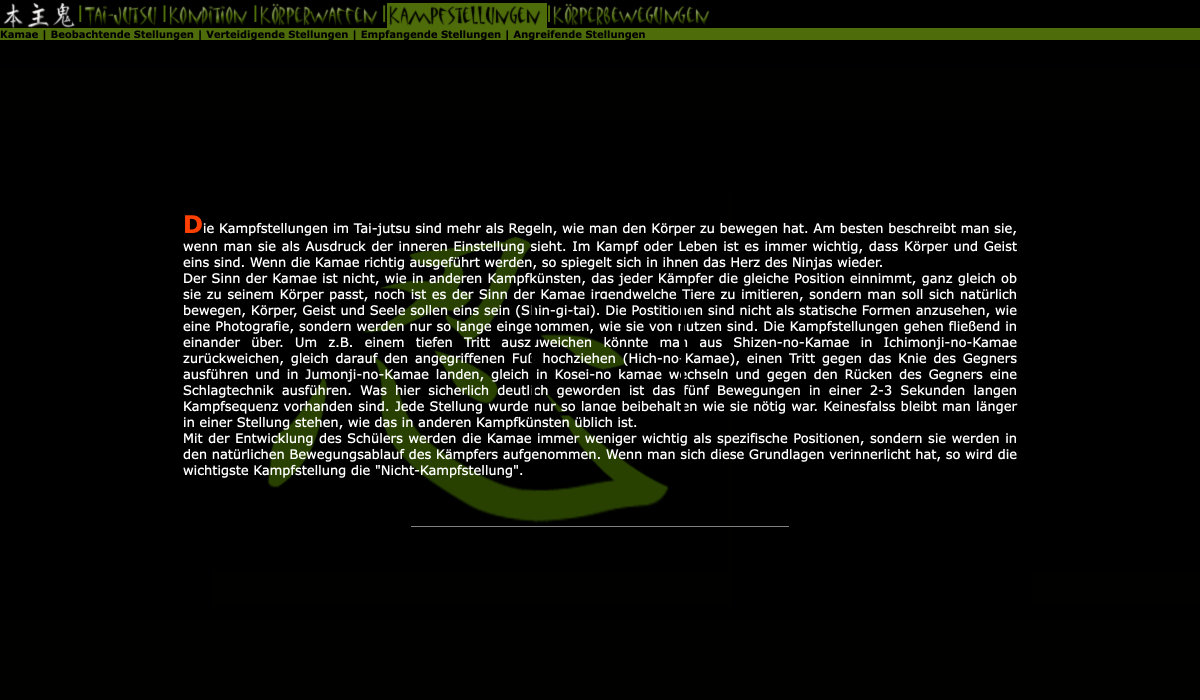 In January 2002 I put a new design (version 2) of the website online. The first website only used a few table cells to create the layout, this version relied on the spacer GIFs that were common at the time, with which you designed the borders of boxes.

I had already created the second version in parts with PHP in order to only have to maintain recurring parts once.

At that time I also had a guest book, a forum, and a counter, as was common on many sites at the time. I created the navigation with JavaScript and it was very difficult to use. I also used Flash at times for a great light effect and a pure Flash home page with music and animations.

In addition to a questionable selection of fonts and hip style, I introduced bamboo as a trademark of my website for the first time. 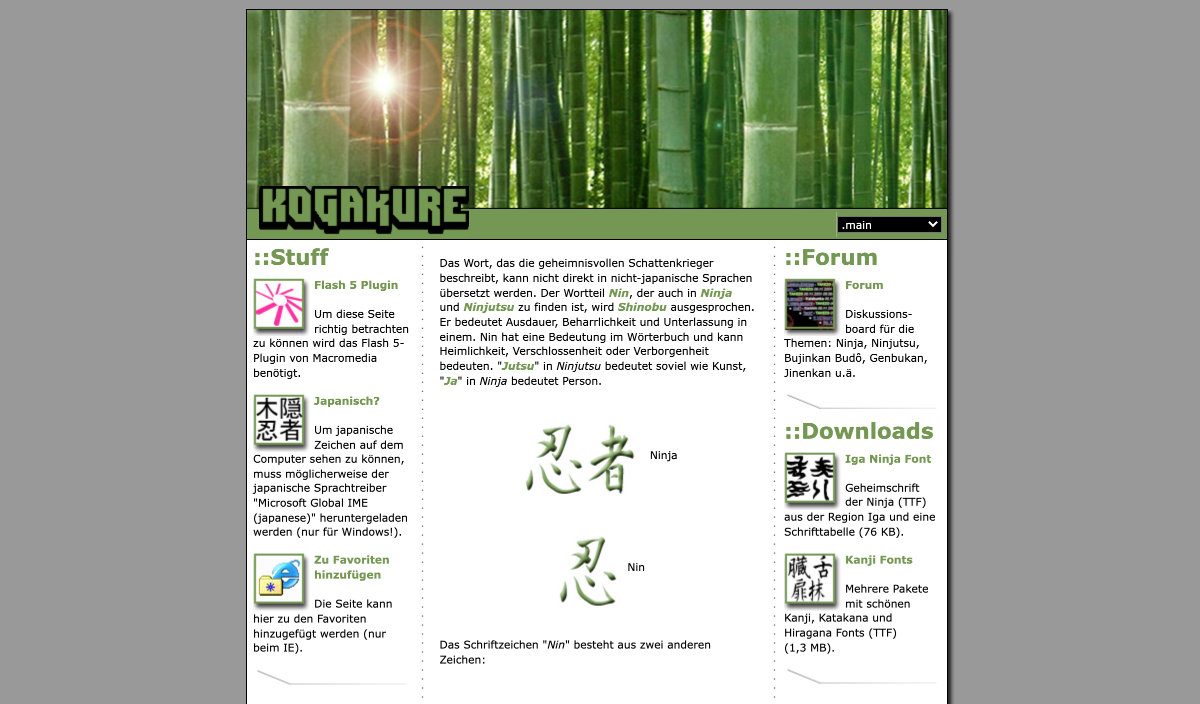 In September 2004 I created version 3 of the website. As I slowly gained more understanding of design, the website didn’t look horrible anymore. Instead of a huge header image, I was now using a stylized bamboo that I found somewhere on the Internet due to a lack of manual skills and then modified it with various photo filters and changes to protect against copyright infringement until it could pass as my own creation.

I also ordered a seal stone, carved by a Japanese artist, I ordered over the internet. I remember it took a lot of effort for him to find the characters of kogakure in the Chinese seal script.

Technically, I used a semantic CSS layout here for the first time, which used floats to organize the individual columns on the page. 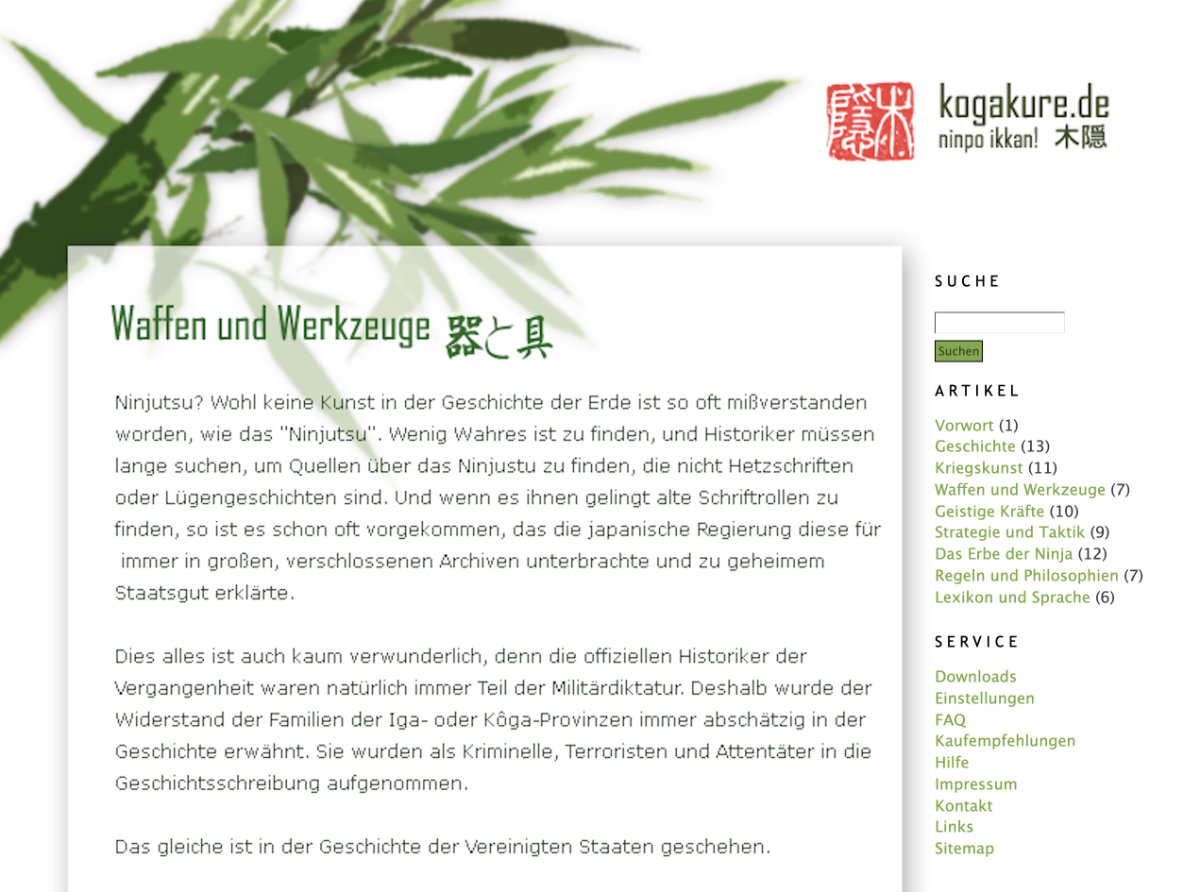 Two years later, CMS (Content Management Systems) were everywhere and I bought a license from ExpressionEngine to run my blog with it.

For version 4 of my website, I had created a completely new bamboo in Adobe Illustrator using the gradient mesh tool.

There have also been improvements to the fonts and the overall design has become lighter and fresher. 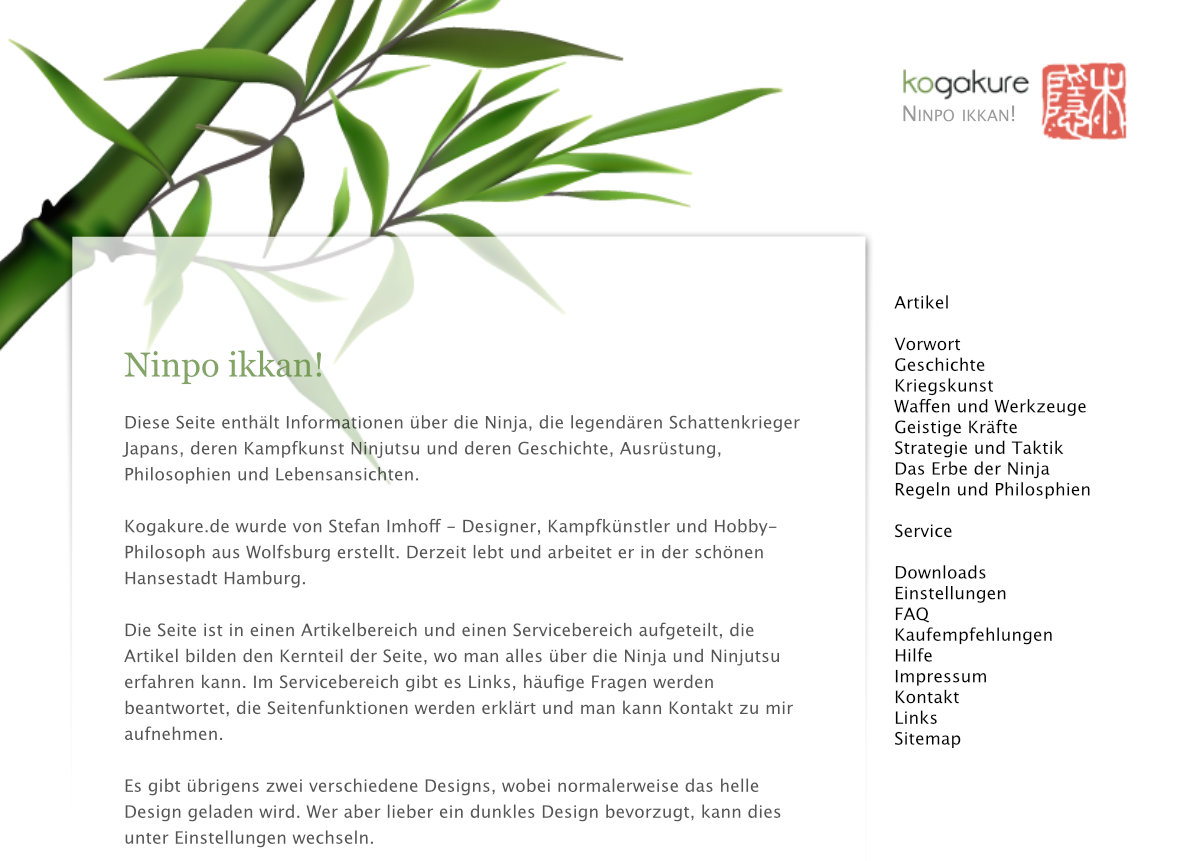 Nomination for the Web Design Book

The website was nominated for the Webdesignbook. The web design book was a project that honored impressive designs. The nominated pages had to be implemented in a table-less layout, with valid markup and CSS. Once a year, 150 websites were selected by a well-known jury and published sometime in the fall of the year in book form with around 248 pages. In addition, the book contained interviews with designers, articles about designers, designs were organized by color, style, and author. That year the jury consisted of Andy Budd, Tammie Lister, John Oxton, Marco van Hylckama Vlieg, James Archer, Kyle Neath, Chris J. Davis, and Thomas Silkjær.

Bujinkan at World of Wonders

The World of Wonders team visited Hatsumi Sensei in Japan and recreated historical battles and Ninja missions. A few German Bujinkan Dōjō assisted the film crew both in front of and behind the camera.

I had the pleasure of providing the editors with theoretical knowledge before the film work began.

Version 5 of my website is going live. This time it was only a small visual change, but the technical part was completely new.

I used a web framework for this for the first time, which meant that I had to write every single line myself and, in addition to templates, also had to take care of the database, controller, and various other things. At that time, the Python web framework Django convinced me, so I taught myself Python and built the website from scratch. Django’s admin interface in particular was a particular highlight back then. 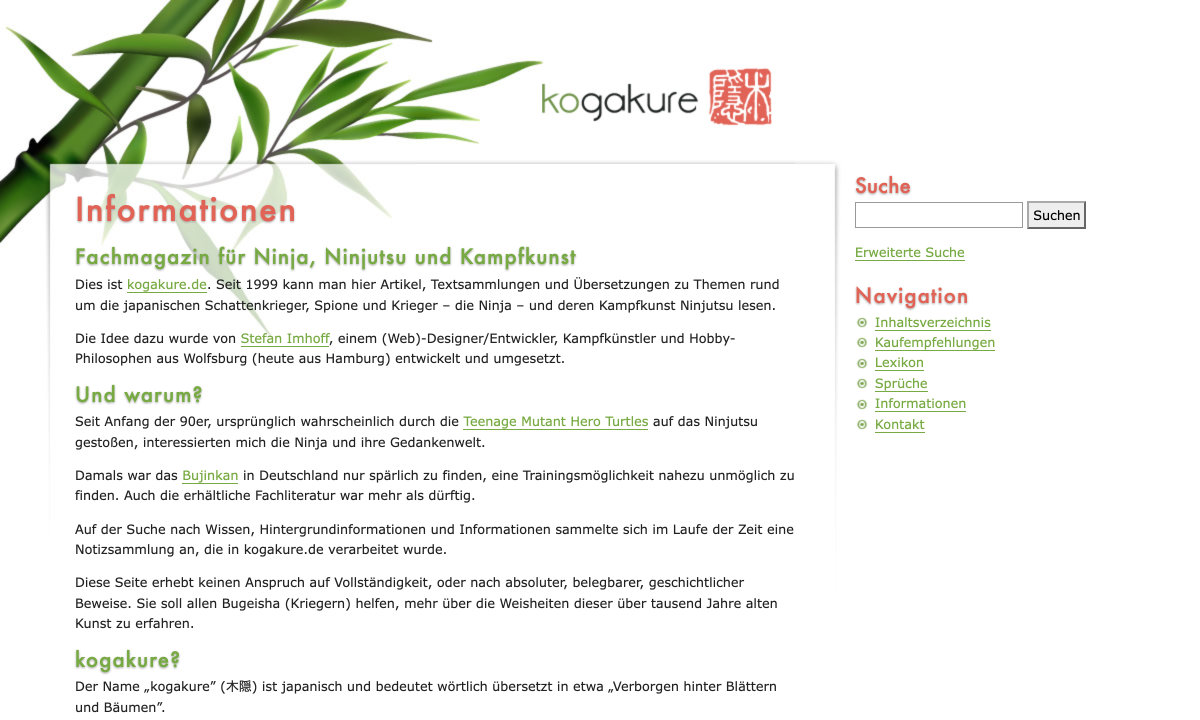 Since I had a small collection of sayings and quotes on my website, I was warned by Karl Valentin’s heirs for copyright infringement. I had to sign a cease and desist letter and my lawyer was able to avert major damage. I paid nothing to the plaintiffs.

For the first time, I came into contact with really terrible people whose whole purpose in life was to make life difficult for other people. Since Karl Valentin’s works entered the public domain in 2018, the heirs wanted to earn as much as possible before this source dried up.

It became clear to me that these were commercial warnings when my lawyer informed me that his law firm in Hamburg alone represented four clients on this one said sentence.

Unfortunately, after this experience, I was forced to remove the sayings from the website completely, because I could not determine for each saying without a doubt whether the author had been underground for more than 70 years.

Five years later the sayings were back (I had checked every single author and removed all newer authors). Along with the sayings came a completely new design and version 6 of my website.

I had said goodbye to Django as I was involved with Ruby professionally and Python was just a hobby. It was also a lot of work to keep such a website up and running.

Luckily, many other developers had realized this as well, and more and more people had started converting their websites and blogs to static pages. There is an almost unlimited number of Static Page Generators that allow you to work with templates, logic and data and still end up throwing out pure static HTML pages. Also, no one can hack the website. And no database or expensive and complicated server software is required, but the sites can be hosted almost anywhere and scale fantastically. Even a few thousand hits per second won’t distress a server.

I used Jekyll as a page generator, used PostCSS for my CSS, Browserify for my JavaScript and Gulp.js as a build tool.

The entire website was mobile-optimized and ran on any device.

I recreated the bamboo from scratch in Affinity Designer to embed directly into the page as an SVG (and the gradient tool was not supported by SVG). 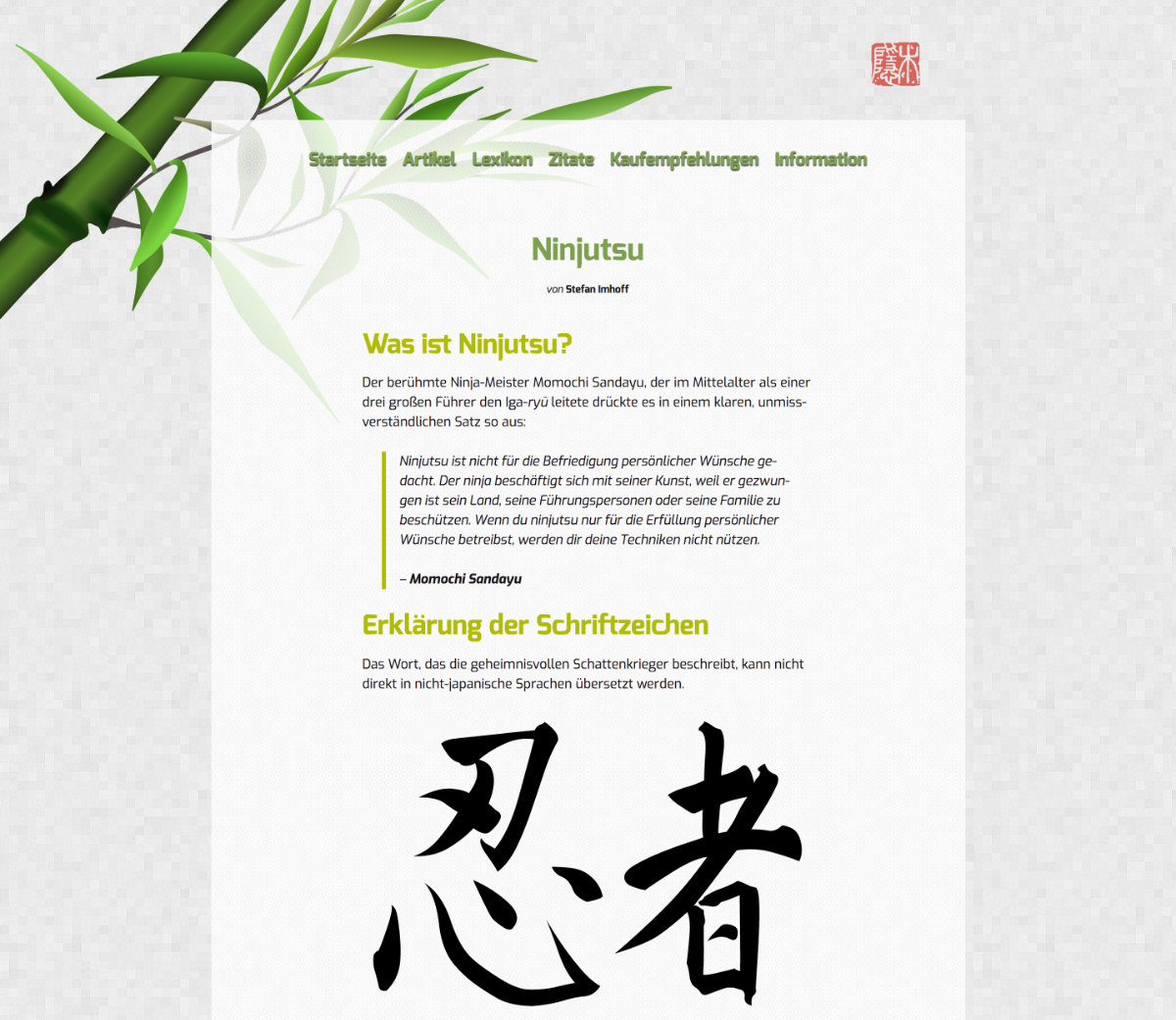 After six months of work, I published an eBook of kogakure.

I used GitBook to write my book and also for hosting and delivering the eBook variants.

As part of the revision I fixed numerous errors, looked over each article, added new images and replaced graphics with SVG wherever possible. 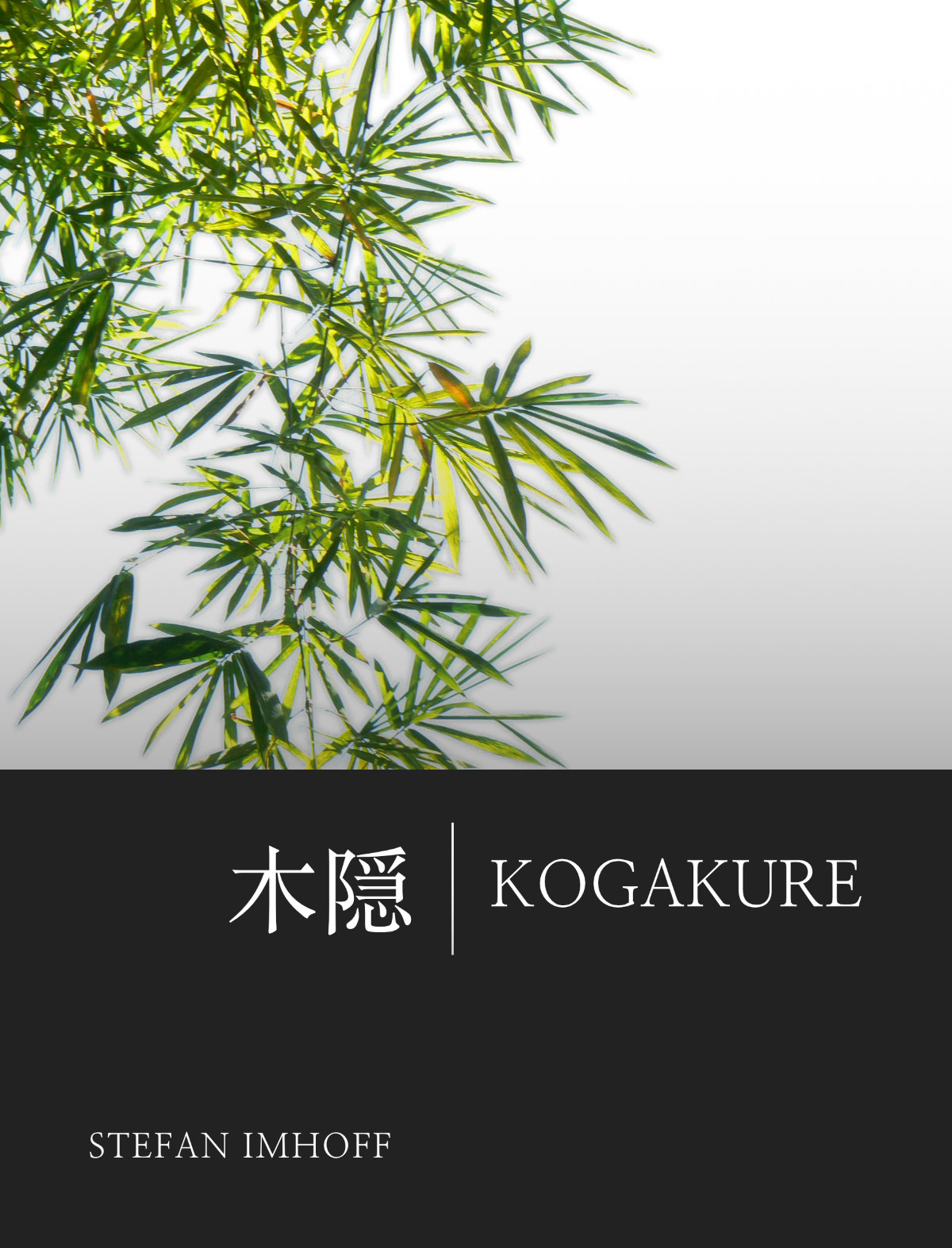 Since Jekyll renders very slowly and I had already replaced my private website with the static page generator Hugo, it was just the next logical step to do the same for kogakure.de.

At the same time, I was able to rework the whole website, make some minor graphic changes and completely redesign the homepage.

I was also able to use the CSS Grid Layout on a larger scale for the first time. Working with this new CSS standard for page layouts was incredibly fun.

The website had now a service worker and could be viewed even without an internet connection. 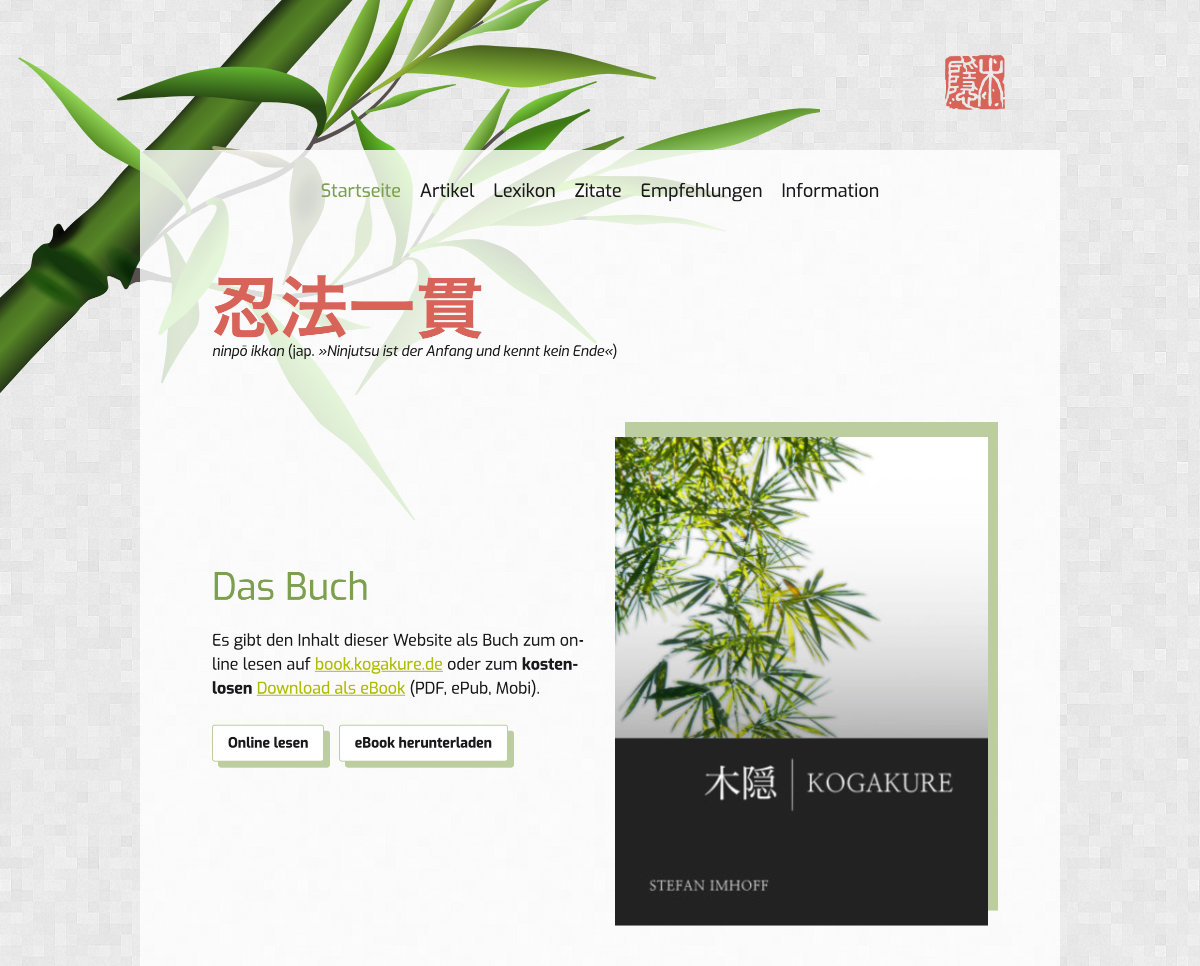 In February 2022 I created a new design for my website. I used the Japanese design based on the aesthetic of Shibui developed by me in 2020. The design was originally developed for my private website, later I also used it for my photo blog. I reused basic things like the grid, the color palette and typography again, but adjusted each of the pages a bit. 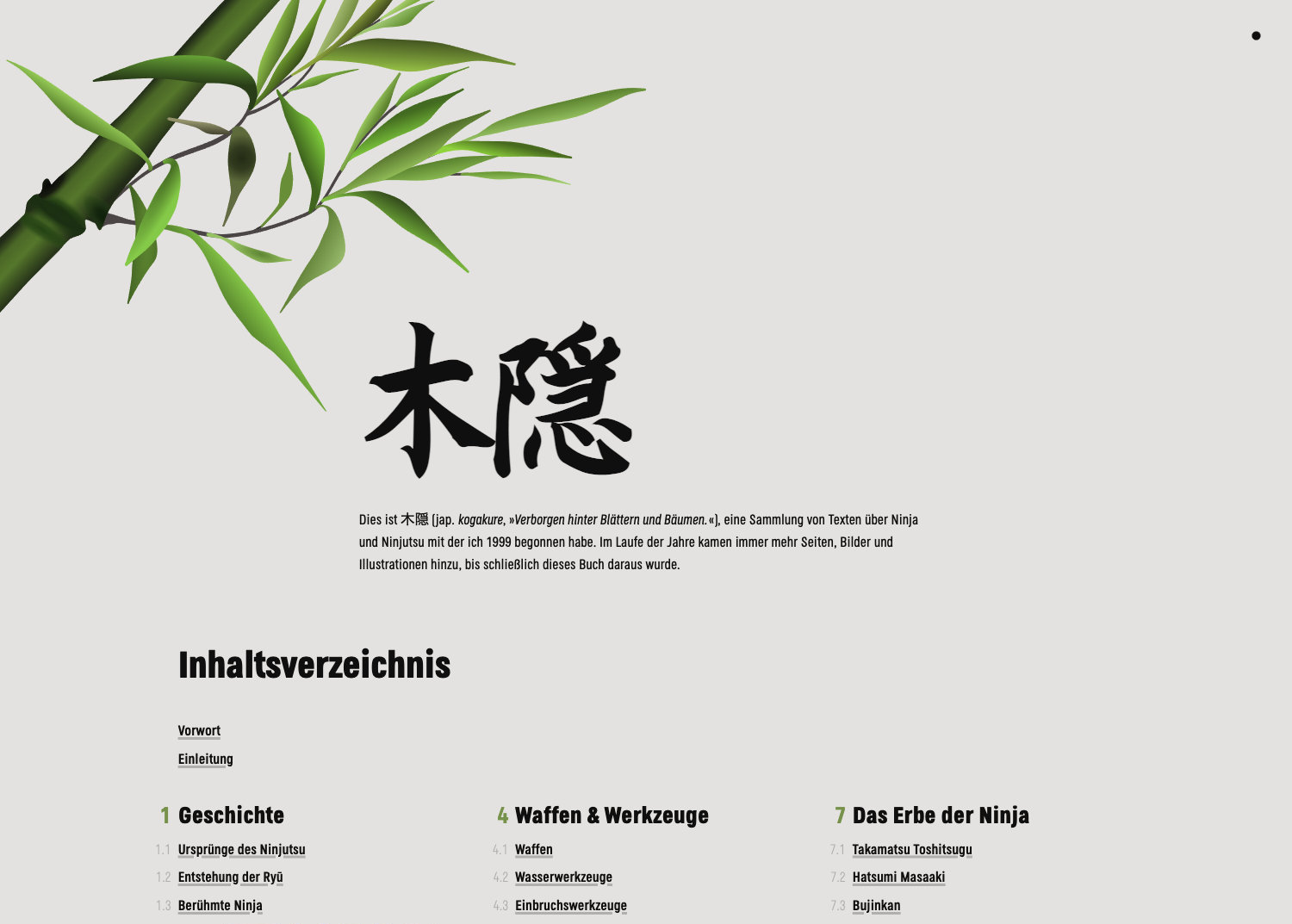 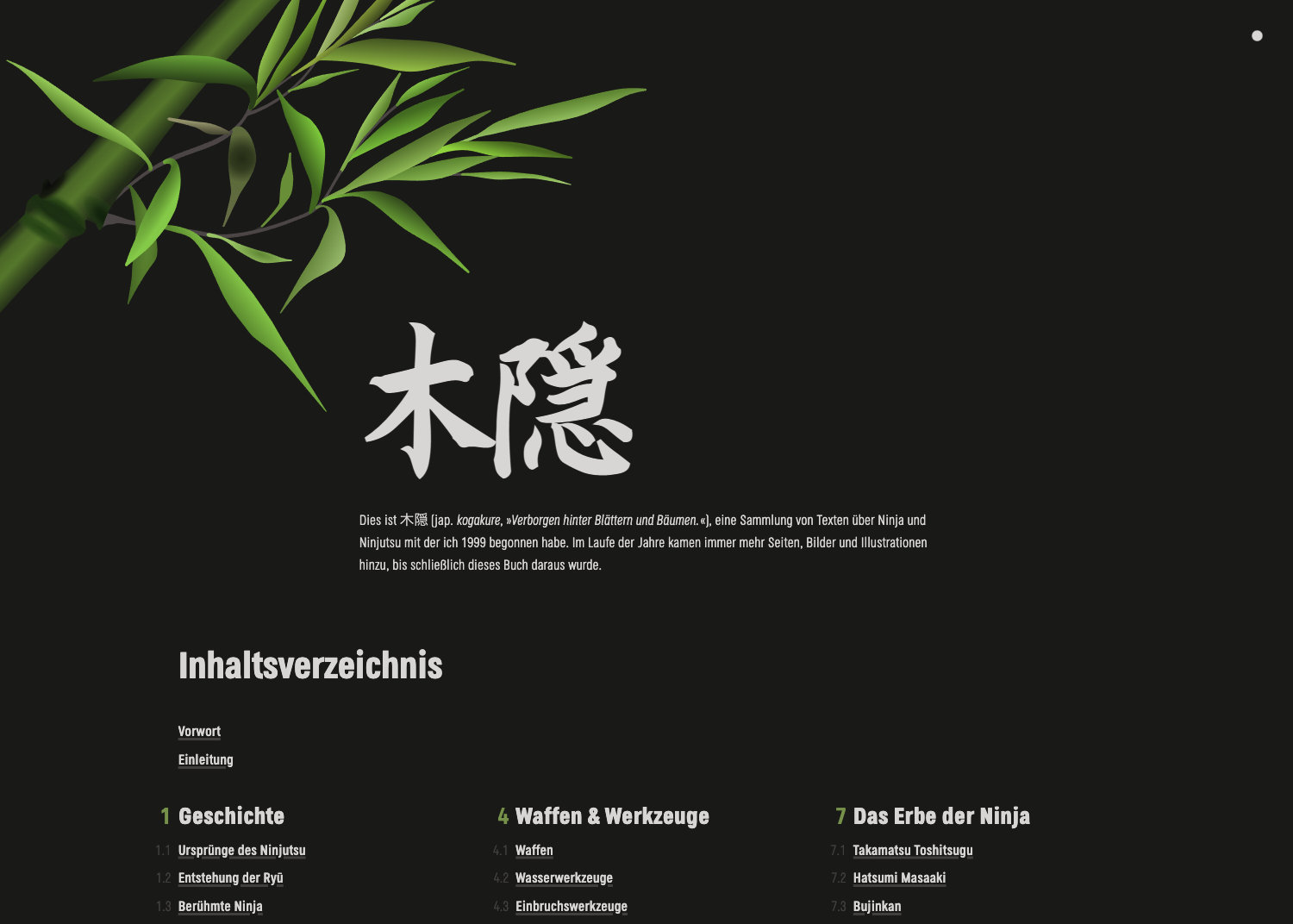 For the first time in the more than 20-year history, 木隠 is now also translated into English. I would like to make the work accessible to a larger readership.