The Rules of the Ninja

Whenever I’ve tried to find a reason for the survival of the nine traditions of Ninjutsu over a thousand years of history, I’ve believed it is because each sōke or head of the family shared their experiences in writing and orally. The heads of the family risked their lives to attain enlightenment and their experiences became the rules of the Ninja.

The Ninja created these rules to attain divine wings. The rules were created naturally and fit into any time and any situation. Through them, one becomes aware of kyojitsu tenkan ho, or the proper use of truth and falsehood in the training of ninpō taijutsu. These rules are like the seven ways, three directions of the Ninja method of disguise; the seven mysteries of disguise and the three directions add up to ten. Ten symbolizes a good force that conquers evil.

The Ninja’s goals are: First to use Ninjutsu to infiltrate the enemy camp and monitor the situation. Then strategies for a surprise attack or inner turmoil can be developed. It is true that we have no choice but to strive for victory when the enemy stands against us, but normally we should obliterate ourselves in order to bring our actions to a successful conclusion. Here I am speaking of enemy land as something that has form, but I would like to mention that enemies can also be found in nature and in the souls of other people. These efforts should be used for the rulers and the country to protect their own country and themselves, and ensure peace for both sides.

Secondly, a Ninja should help the rulers and the country with a righteous spirit, and cultivate his soul for teachers and parents. He must not use Ninjutsu for his personal gain, desires, or for the purpose of entertainment.

An important point in the struggle to protect justice is that the enemy’s justice is often misinterpreted as not being justice.

I would like to speak about myself, fifteen years after the death of Master Takamatsu. My students have evolved and I feel I can now truly call them students. […]

It is not allowed to use Ninjutsu for the purpose of entertainment or to perform magic. When one uses Ninjutsu for such purposes, it is no longer Ninjutsu but sorcery or sorcery. Such a person will not be able to live in a society where he opens up to others but will live together with the snakes, toads, and snails in a world where the sun never shines.

Awareness stemming from self-interest or egoistic desire sends you in a direction without a goal. If you forget the Ninja rules and hop on this tram with violent thoughts you will arrive at the terminus criminal or prison or steel coffin.

There’s something oddly fascinating about Ninjutsu. A bad Ninja who takes advantage of what he has learned will appear as a vulgar merchant or stupid criminal. Just as followers grow sluggish after the training hall is firmly established, a Ninja’s skills grow feeble when he visibly attends to his needs.

Third, Ninjutsu places great importance on hojutsu, which is kyojitsu tenkan ho, or the method of switching back and forth between truth and lies. You can use taijutsu without revealing yourself to the enemy, but if you have no other choice, you can use happōhiken or the eight sword-wielding methods or use Ninja tools to confuse the enemy.

It’s important to confuse him. One might say hojutsu places more emphasis on attacking the mind than the body. This means the Ninja uses techniques of investigation, espionage, stealth, and uses both truths and lies side by side to achieve his goal. […]

Fourth, Ninja must master the use of explosives, Ninja tools, and drugs – both good medicine and poisonous drugs. It’s important to follow the rules about not killing an enemy. The Ninja realized the principle that a bad ending destroys them. And considering human life, a person is dead when his spirit is dead, even if the body is alive. The Ninja promoted this spirit of justice.

Fifth, a Ninja should spend considerable time practicing his weapons. It is written to take advantage of it and learn from his instincts. Gun use changes over time, and what is valid today may not be valid tomorrow. You should practice being able to use any weapon. When I visited New York, everyone was amazed that I could use any weapon that was given to me. They called me a magician.

Sixth, a Ninja should always come into direct contact with meteorology, physiography, and geography. Through meteorology and physiography, we can understand the changes and true appearance of nature. This is not academic learning, but rather an experience that involves the whole body so that we can understand the silent language of nature through the transmission of feelings and sensations. This could be viewed as talking with God.

Seventh, at a time when Japan was in civil war, Ninja who broke the law were severely punished. Even the closest relatives were beheaded, exiled, or banished. As the war escalated, Ninja repeatedly found themselves in the tragic situation of having to live within the confines of those rules. This is also why they developed a philosophy that says you should always try to avoid a fight and steal away or flee until the fight is over. […]

Eight Ninja are not allowed to kill anyone, injure honorable people, steal money or steal valuables.

Ninth, a Ninja must always take care of himself, develop a strong body, develop quick movements, and learn and master as many things as possible. I love music, play electric guitar, perform Japanese dances like painting and writing, and I work hard to develop the soul of Ninjutsu. 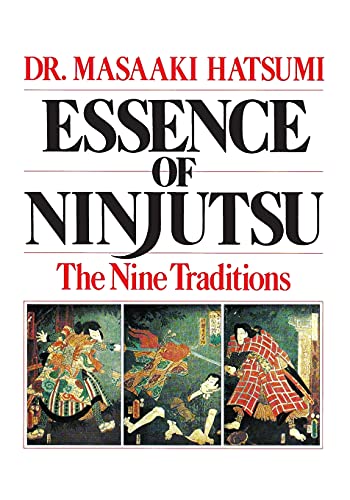